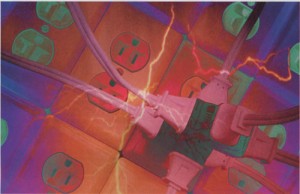 How to choose and use an AC power conditioner.

Powering your studio gear directly from an unprotected AC outlet is like running a fine car without fuel and air filters: it’s courting disaster. So many things can go wrong-especially with sensitive digital circuits-that we can only discuss them superficially here, but the bottom line is that you can and should protect your equipment with power conditioners. But not all power conditioners are created equal; let’s take a look at the key problems and solutions. 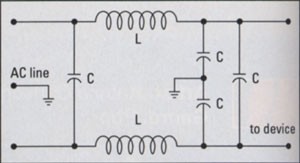 FIG. 1: This simple low-pass filter uses capacitors to shunt frequencies above 60 Hz to ground, filtering out high-frequency RFI and EMI.

Radio-frequency interference (RFI) and electromagnetic interference (EMI) can be caused by electrical appliances, radio transmitters (including cell phones), fluorescent lights, DC switching power supplies, AC cables, computer monitors, televisions, and a host of other sources. Basically, this is high-frequency interference (say, more than 10 kHz) that can travel through power lines, through the air, or through various cables in the studio. To put it mildly, this electronic hash can really trash your studio.Digital circuits, in particular, suffer badly from these various forms of hash. So do audio signals, even when traveling through well-insulated cables. Eliminating this entire mess is a complex art that is beyond the scope of this article. But using a power conditioner to reduce RFI and EMI in the AC power system is relatively simple and a good place to start.

Most power conditioners use one of two approaches to filtering out RFI and EMI. The simplest filter uses one or more capacitors between the power buses and ground (see Fig. 1). A more effective approach is to use a multistage low-pass filter. In either case, the cutoff frequency is set above 60 Hz. These filters shunt the high-frequency interference to ground, providing a clean sine-wave power signal.

The down side is that this method can generate extraneous currents in the system ground. Engineers disagree about the seriousness of this problem, but thanks to a new approach to AC power systems, it can be dealt with fairly simply.

Balanced power is a relatively new solution to AC hash problems. With this approach, the hot and neutral wires from a balanced power supply each carry a power signal of 60 VAC instead of 120 and 0 VAC. The total is still 120 VAC, but the signals are 180 degrees out of phase with respect to each other, so any current in the ground (such as that caused by a line filter) is canceled out.

To top it off, the EMI radiated from the two conductors gets canceled out. This is especially great in the studio because it eliminates noise that might otherwise get into the audio signal when lower cords are adjacent to audio cables.

Power grids are complex beasts, and the demands placed on them vary constantly. Such problems as a nearby lightning strike, unusual levels of demand (say, when everyone in the area turns on their air conditioning due to a heat wave), or a problem at a power station can cause the system’s power to fluctuate. You are more likely to experience these fluctuations the further you live from a power substation or plant.

If the demand on your local power utility suddenly drops, a temporary overvoltage condition, or power surge, can result. Conversely, a sudden increase in demand can cause an undervoltage condition, or sag. In addition, power companies in high-demand areas often avert larger problems by intentionally creating brownouts (voltage reductions of 5 to 15 percent) within a specified area. The power utility eventually compensates for the change, but in the meantime, your gear’s performance can be affected, and some equipment could be permanently damaged.

A spike is a sudden, extreme increase in voltage that immediately subsides. Whereas a surge can last for a few hundred ms or more, a spike hits quickly, lasts approximately 100 µs or less, and then is gone. But it can hit very hard. A lightning strike somewhere in the utility network (not necessarily a direct hit) could easily cause a 5,000V spike. Even if your gear is not immediately fried, components could be damaged to the point that they will fail soon thereafter.

Sometimes a voltage fluctuation can be caused within your building or neighborhood. For instance, motors require extra current to get started, and when a refrigerator or air conditioner switches on it can cause a brief sag of as much as 20 percent. The sag might only last a few hundred milliseconds, but that’s enough to cause damage. When a transformer or large motor-say, a vacuum cleaner-is turned off, a significant spike can result. If you want your precious studio electronics to last, you need to protect them against these electrical horrors.

Many power strips and all of the power conditioners listed in the Personal Studio Buyer’s Guide contain some form of surge and spike protection. Probably the most common and inexpensive way to accomplish this is a metal-oxide varistor (MOV), which is a voltage-clamping device. If you know what you’re doing, you can even buy these devices at electrical parts houses and catalogs and install them into your existing power strips. Some inexpensive units use one MOV but the better units use as many as three (see Fig. 2).

Below the threshold voltage, the MOV is an open circuit. But if the voltage exceeds the threshold, the device conducts and absorbs the transient, releasing the energy as heat. Typically, an MOV can respond quickly-say, within a few nanoseconds. That’s enough to handle most surges and spikes.

The problem is that one good, stiff spike can demolish an MOV; if that happens, you are protected from that one spike, but thereafter your power strip or conditioner is unprotected, even though it still supplies power. Some power strips have indicator lights that go out if the MOV blows, but in many cases you won’t have a clue that you are vulnerable.Furthermore, MOVs don’t do anything to protect you from sags and are insufficient for handling extended overvoltages.Therefore, I recommend using MOV-based power protection as a second line of defense. Install one of these relatively inexpensive units in each rack; however, instead of plugging them directly into the wall outlet, plug them into a higher-end power conditioner that uses an isolation transformer and offers complete line regulation, rather than just surge and spike protection. We’ll discuss these higher-end devices next.

Line regulators provide a professional solution to surges, spikes, and sags. These devices use constant-voltage isolation transformers that deliver a steady 117 or 120 VAC as long as the input voltage doesn’t sag below a minimum tolerance (commonly 90V) or surge above the maximum (generally 130 to 140 VAC, but sometimes as high as 300V). With a well-designed unit, if the voltage drops or surges outside the tolerance range, an internal circuit breaker is tripped to shut everything down rather than expose your gear to damage. This kind of device should be your first line of defense.

With this type of protection surges, sags, and spikes are virtually eliminated, regardless of the source. The usual tolerance range of 90V to 130V should be enough to handle the vast majority of problems; if a fluctuation is outside of this range, it’s time to shut down the studio and wait for the power system to stabilize.

Line regulation works fine for most studio gear, but some equipment-especially computers-suffers if the power is suddenly cut off, whether due to a vigilant line regulator or a power-system blackout. As a result, I highly recommend that you protect your computer system with an uninterruptable power supply (UPS).

A UPS has a battery that takes over if the power drops too low or fails entirely. That gives you time to save your files and properly shut down your computer. (It’s handy when you are editing on a RAM-based sampler or synth, too.) The amount of battery time depends on the UPS and the load you place on it, but most such units give you at least ten minutes.

Most uninterruptable power supplies have some form of surge and spike protection, but not all have line regulation. I strongly recommend you use a UPS that includes line regulation so that you are completely protected. (By the way, power spikes can be transferred through the telephone lines, frying your modem, so consider looking for a UPS that has phone-line protection, too.)

An important consideration is how quickly the UPS can detect a power failure and switch to the battery. The entire process should occur in less than 10 ms. Some systems also come with computer software that monitors the UPS and allows you to schedule power-saving computer shutdowns.

A few other factors should be considered when buying a power conditioner/regulator. The most obvious is that the number of outlets varies. These outlets are rated for a given amount of power, so be sure to match the power requirements of your devices with the appropriate outlets.

In addition, most power conditioners are designed for 15A, 120 VAC circuits, but some heavy-duty units are designed for 30A, 220V systems. Always use the appropriate power conditioner for your AC circuit, and don’t overload the system. (To ensure a proper load, add up the current ratings of all connected units and allow some headroom. Power amps and devices with motors, tubes, and fans tend to draw the most current.)

Many power conditioners offer input-voltage meters, which can be analog (LEDs) or digital (LCDs or neon displays). These are useful because they show you approximately what the power conditions are at any given time.

Another extra is onboard lights. Many units offer slide-out light tubes (which may be metal or plastic); some have BNC connectors that accept Littlelite gooseneck lamps. These can be very handy, especially for live performance situations.

Two other factors merit mention. First, the mechanical assembly of the unit should feel solid, not flimsy, and the paint and screened markings should last. Remember, you want this unit to last for years, and it might have to withstand the rigors of live performance.

Finally, as with anything else you buy, check the warranty. Obviously, the length of the warranty is a factor, as is the completeness of what is covered. It’s also nice if the warranty is transferrable, so that a second-hand unit is still covered.

As you’ll see from the charts on pp. 132-137, you have plenty of choices. As with everything else in your studio, it pays to carefully evaluate your needs and plan an entire, integrated AC power-distribution system that can protect your gear now and can expand to meet your future needs.

Steve O was the editor of Electronic Musician magazine when this story was initially published in the 1999 edition of EM’s Personal Studio Buyers Guide (PSBG) supplement. By the time the story was reprinted in the 2002 edition of PSBG, he was EM’s editor in chief.

This article is reprinted from the 1999 edition of Electronic Musician’s Personal Studio Buyer’s Guide with the permission of its publisher, Penton Media. For more from EM, please visit www.emusician.com.