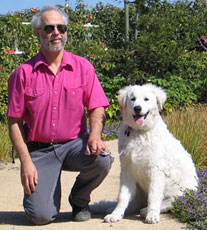 As longtime readers of this column know, when not involved with music and publishing, I am usually working with dogs. Although dogs lack the self-awareness of humans, they are nonetheless intelligent, emotional creatures, and many of the lessons I have learned from them apply to working with humans. Here are a few examples of lessons dogs have taught me that I have found useful when dealing with musicians in a studio environment.

Keep your eyes on the prize. When working with dogs, your goals are to teach them what you want, to motivate them to perform well, and to maintain safety. You must remain focused on these goals and not allow emotion to distract you or cause you to make handling mistakes.

Translation: You may have to put your ego aside at times in order to obtain and capture a peak performance from your artist. Focus on doing what it takes to make the session successful.

Size up the individual animal and adapt your leadership style. Breed differences notwithstanding, each dog is an individual. Some respond wonderfully to a soft voice and are frightened by a sharp one; others of the same breed simply ignore a soft voice and respond only to a dominant handler.

Translation: Some people need pats on the back, others perform better with the occasional kick in the tail, and many respond differently according to their mood. You need to size up each individual and adjust your approach.

Never lose your temper during training, unless by design. Sometimes a calculated show of pique can get a dog’s attention, but losing control is always destructive. It won’t increase the animal’s desire to perform and could destroy its trust in you.

Translation: Blowing your cool is unlikely to improve anyone’s performance, so address problems calmly. This comes back to keeping your eyes on the prize. Occasionally an artist might benefit from a kick in the tail, but that is a high-risk tactic and requires that you know how to deliver a coolly calculated message. Never do it out of anger.

Strong leadership is important; harsh leadership is destructive. Pack leadership is a matter of mental strength, confident handling, and sending the right signals via body language, rather than physical domination. The goal is to command respect, not elicit fear.

Translation: In the studio, strong leadership means knowing what you need to accomplish and being confident, prepared, and organized. It does not mean being bossy or overbearing. Being pushy just makes people want to push back.

Respect what a well-trained animal tells you. If a trained dog is clearly uneasy or is barking at something you can’t detect, it probably has good reason. Don’t automatically ignore or correct the dog; instead, respect its abilities and observe the situation more closely.

Don’t coddle a clingy dog. If you encourage clinginess by overindulging a dog, it makes them too dependent on you. This can lead to separation anxiety, in which the dog falls apart emotionally when you’re not present. Don’t cave in to constant demands for your attention. Allow time for the dog to calm down and stabilize before trying to work with them.

Translation: Some artists are extremely insecure and want to have their hand held constantly. Although you do need to be sensitive to a point, overindulging these artists can simply feed their neuroses, and as the sessions go on, they can become increasingly difficult to keep on target

Don’t expect a puppy to perform like an adult. Many people make the mistake of expecting a puppy — especially a large puppy because of its size — to respond with the steadiness and focus one can rightfully expect from a mature adult dog. Such misplaced expectations will just frustrate you and confuse the puppy. Be patient, size up the pup, and take things a step at a time.

Translation: Even a brilliant young artist or nightclub veteran may be a studio virgin. Don’t assume that they know how to prepare and conduct themselves in a recording environment. Size up the performers during preproduction, and if you discover that you are dealing with a studio newbie, explain how the sessions will work, how the musicians should conduct themselves in the studio, and how to prepare.

And that’s the inside poop.