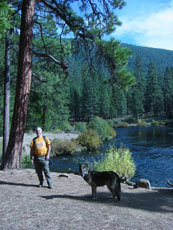 Back in October 2004, I took a road trip up to central Oregon to visit friends, including EM contributing editor Michael Cooper. After we took our dogs for a relaxing woodland hike along the stunning Metolius River, we settled back in the control room at Michael Cooper Recording to listen to some recent tracks. Among them were a couple of tunes that Michael had written and produced, which I enjoyed thoroughly.

That’s when Michael told me about his big plan. He had finally realized that to get his country demos heard in the right places, he needed to give them the signature Nashville sound, which is largely the product of using ace Nashville session players. To accomplish this, he was planning to go to Music City to record a few tunes in a major studio, using A-list Nashville hired guns. That was a big commitment, financially and logistically, and it represented a major step in his career, even though he had been composing, playing sessions, and operating a professional project studio for many years.

The more we discussed the plan, the more excited we became. Years ago, I played recording sessions in Nashville, and I learned that magic is often in the air when the top pros get cooking. Observing my response, Michael suggested that we might use his experience as the basis for an article about how to plan and pull off this sort of expedition.

We wanted to include information about budgeting, studio selection, preproduction, scheduling, Nashville studio procedures, and the Nashville chord-numbering system, among other things. Michael noted the potential for problems after the tracking sessions, so he suggested sections on transferring tracks between systems and studios, time-stamping, and evaluating the tracks once you get them back to your home studio for editing and mixing.

Before we knew it, we had planned this issue’s cover story (see “Hired Guns” on p. 44). Best of all, the final article exceeded our high expectations, thanks to Michael’s excellent work and polishing by Senior Editor Gino Robair and Copy Editor Marla Miyashiro. Even if you never record outside of your personal studio, you’ll learn a lot about how top pros produce major-league work.

Like Michael Cooper, most of our best authors come from the ranks of our loyal readers. Those folks live and breathe recording and sound design, and it’s no surprise that their article ideas often turn out to be right on target for EM. So when potential new authors ask me what they should write about, I tell them to bring their own ideas to the table first. That way, I know they will write about topics they are interested in and care about. Later, when I get to know their capabilities and interests better, I can offer my topic ideas and those of our staff editors. But as our cover story demonstrates, many of the best ideas come right from the authors.

So if you think you have the right stuff to write for EM, email me at steve.oppenheimer@penton.com. Include background information on your recording experience, a writing sample, and several detailed article topics. Check out our free back-issue list and Web archives at www.emusician.com to make sure we haven’t recently covered the topics you have in mind. I hope to hear from you soon!