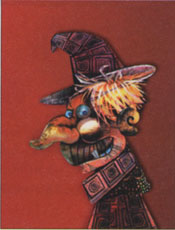 The most famous “mixers” in the history of English literature were the three witches in Shakespeare’s Macbeth. Admittedly, their raw material was a lot more exotic than the contents of our music mixes: “eye of newt and toe of frog, wool of bat and tongue of dog” are a lot stranger than even the most “out” musical tracks. But the witches’ rhyming lyrics were impeccable, and you have to admit that their results were more potent than your average music mix.

The Weird Sisters also understood the art of deception, that what appears to be good can be bad: “Fair is foul, foul is fair,” they said before offering Macbeth seemingly optimistic predictions that actually foretold disaster. Similarly, when we begin mixing a piece, we often discover that tracks we thought were fine don’t work in the mix, whereas tracks that appear inadequate when soloed may prove a perfect complement to other tracks.

But how can one know when fair will turn out to be foul or foul, fair? We lack the witches’ magic, though the technology we use seems magical enough at times. The three witches were guided by Hecate, the Greek goddess of the moon and witchcraft who was the ultimate source of their power. We recording musicians can turn to much more benign sources for guidance: expert engineers who have a history of success.

Following that philosophy, associate editor Brian Knave interviewed three highly successful producer/mixers with top credits — Ken Kessie (En Vogue, Tony Toni Tone, Celine Dion), Chris Lord-Alge (Faith Hill, Green Day, Sheryl Crow, Melissa Etheridge, Dave Matthews Band, Barenaked Ladies), and Mark Needham (Chris Isaak, Bruce Hornsby, Meredith Brooks) — and asked them to share the magic they use to avert or fix some of the most common mixing problems (see “Mysteries of Mixing” on p. 96). Of course, there is no perfect recipe for a great mix, but our experts’ advice can help you recognize problems before, as the second witch put it, “something wicked this way comes.”

While we’re on the subject of magic, let’s talk about analog modular synths, which are among the most magical of electronic musical instruments. These wonderful devices allow you to create an endless variety of unearthly sounds, but many people mistakenly assume that they are historical instruments. In fact, analog modular synths are very much in style these days, and at least 20 companies currently offer a wide variety of modules. Associate editor and inveterate synth junkie Gino Robair tested every modular analog synth he could get his hands on; read his fascinating report in “Something Old, Something New” (p. 60).

There’s plenty more, but these stories ought to be enough to stir the pot.